Rocking The Cold and Flu Season and trying to stitch.

I thought it was more than time for an update.
I've found my camera finally but was unable to get the images off of my laptop.
My husband was ill and hospitalized for some time and of course now that he is out I have come down with a cold/flu or whatever it is. It has not been a stellar cold and flu season for me this year. Pneumonia, multiple sore throats, and now this. So much for the personal info, put in more so you will have an idea of why I've posted so little lately.

There was the Secret Santa for one of my stitching groups. I got ambitious and I have to tell you it was coming out even better than I expected. I had pics saved on the laptop of each step. I can easily tell you what it was since it met with disaster and the intended recipient is getting something else. An elegant little needle-book with fancy silver threads and  embroidery in purple satin, some monogramming, and l was letting my inner geek come out to play by doing her initials in Elvin in silver thread. Yeah, the dog ate it. Literally.Oh my.

I'll continue that story after Christmas since I don't want to get into what I did hand make.
Stitching there has been very little of, and much of it hurried.
The Blue and White Sampler has seen a little work. 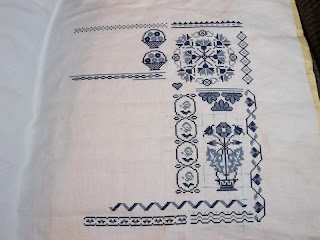 I faithfully dragged it with me to the hospital every day but I think it only saw stitching 2 of those days.

The only other thing I've really stitched on was a piece from Just Cross Stitch which I'd printed in the vague hope I'd get to it.
Well, I sort of did. I was on hold for an endless amount of time and there was this piece of 14 ct. aida I'd set out that had been part of an abandoned project of my husbands nearby. There has half a skein of black within reach, and so it was begun. I'd forgotten how awfully thin DMC black is or I would have used 3 strands. I am not satisfied with the thinness of the stitching, but here it is, worked on only when I'm waiting for something. 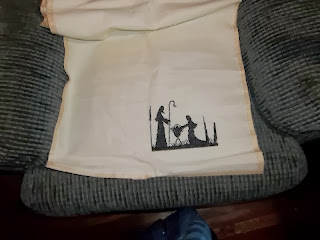 Meanwhile I feel icky and I'm going back into hibernation for awhile. Be prepared since I usually come out of down time with a dozen new plans.

It is a mess this year. Everyone has been sick here too. I haven't sewn a thing in months. I love your blue and white sampler though, it is great to see it back this time.

I hope you are soon feeling much better. A lovely blue sampler.