And Then There Was Stitching!

Lately I've felt as though I will never have time to stitch. When I do it feels like I'm sneaking it in around all the other busy stuff going on.
I decided to work on some small stuff in only one or two colors, thinking I could at least feel as if I've accomplished something.
I began with a cross pattern I'd down loaded from Amazon.com last year. It was only 99 cents. One color and sort of pretty. I picked up my fabric and started stitching. Then I realized that the darn thing wasn't symmetrical. I put it down. I picked it up again two weeks later but it was still getting on my nerves, so I put it down again.
Here is a picture of what I did manage. 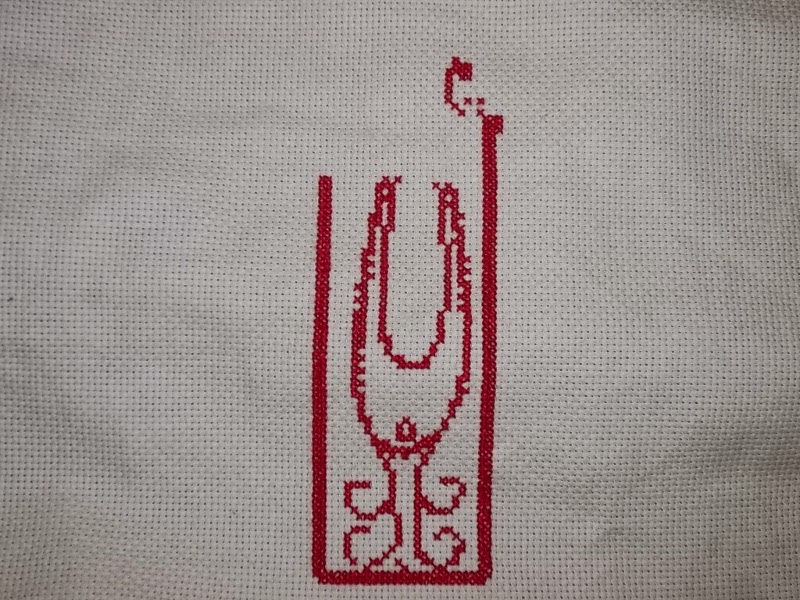 This would be the bottom part of the cross. I will pick it back up at some point but the asymmetry jangles my nerves.

So, I picked out a bit of fabric and pulled out some spare floss and started one of the cross stitch quilts from a little book I've had for years. They would look really cute in my sewing corner. After a bit of time, 5 minutes here and there, it is coming along great. I chose the Irish Chain. I hadn't intended to use Christmas colors, it just worked out that way and I love it. I may have to break down and make an actual quilt like this. 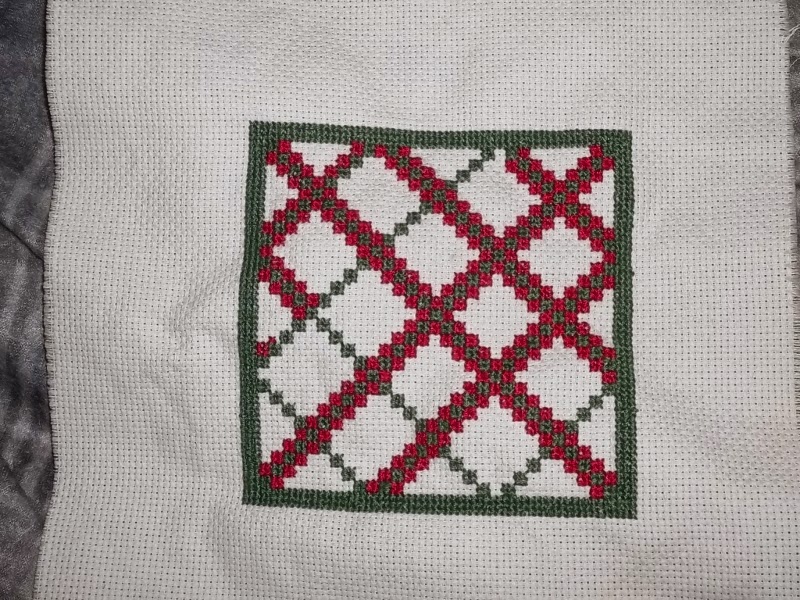 My lack of stitching and crafting time has really been getting on my nerves so I decided that each week I would treat myself to sitting down with a movie and stitching. I'm going to try to make that a feature on the blog as well. I'll share whatever I'm stitching and let you know what movie I watched. Be warned that I love horror movies. My DH Jason will also have a pick at movies so don't be surprised if there are zombies in my future.

I made most of the rest of my 9 patch blocks but forgot to take a picture. I also forgot that I'd told someone I would send them the magazine with the chart for the Blue and White Sampler . I'll have to pick up an envelope and try to squeeze up enough time to actually get to the post office. I hate that guilty feeling when I say I'll do something and forget, and I hate disappointing someone to.

The other thing I've done that made me super happy was buying a little stand for some of my sewing supplies. I stuck it in the closet by my sewing area. It looks fab and I love it. 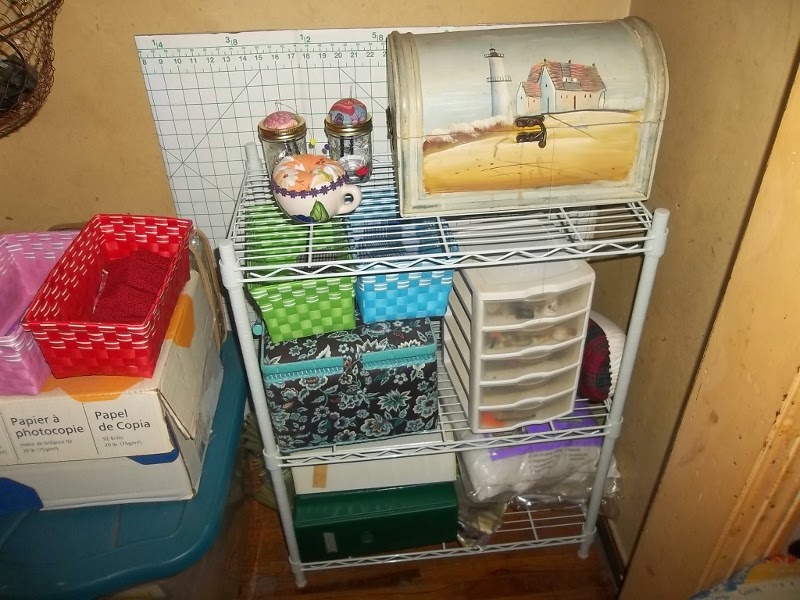 We went back today, my only day off, to buy another but Home Depot was sold out. Boo. They were really reasonable so I'll check back if I don't forget.
Oh, and see that tea cup pin cushion? That was the other project I did this month. It was so fast and easy. I love it. I needed a bigger one for when I'm piecing.
Closer up. 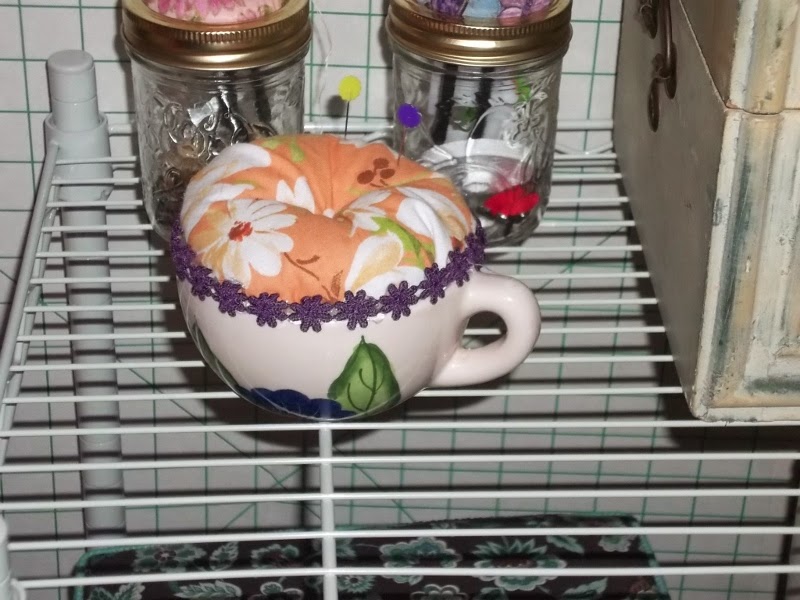 Isn't it sweet?
It is amazing what you can fit into 5, 10 or 15 minutes when you set your mind to it.
One last thing. A quick trip by Goodwill to look for a sewing machine table for Moma Linda (still no luck) and I picked up this glass vase. I've been aching to start a terrarium. I need to collect other plants for it but here it is so far. 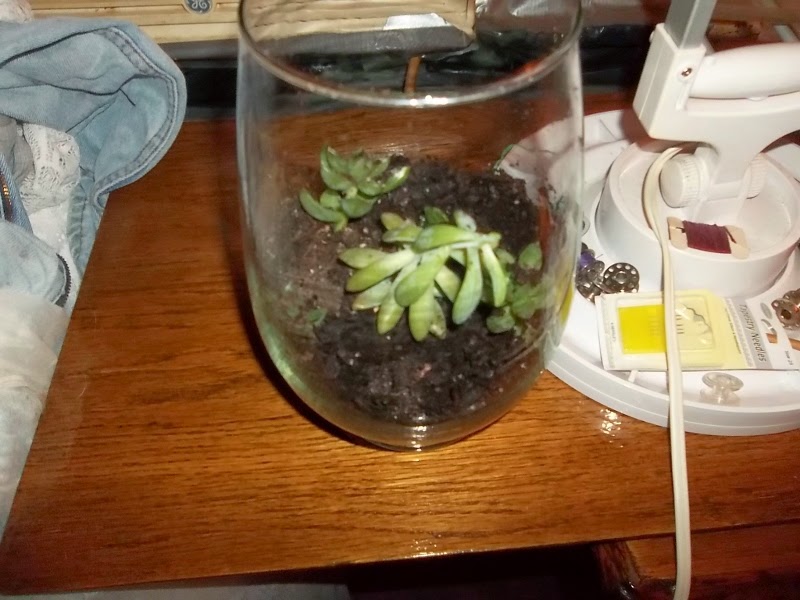 Yeah, I'm afraid that floppy one is not going to make it, and one of the plants doesn't show up in this picture, but you get the idea. The picture doesn't show it but the vase is tapered at the top. Sigh, I'll take a better picture when I remember.

Happy stitching until next time everyone.

Had an extra minute today to get online and read blogs - Love your Blue and White Sampler finish.

Did now know you could download Cross stitch from Amazon.com, thank you for sharing.

Looking forward to your movie reviews.

Thanks everyone for reading. Sharine, I've never done a review so I think it will be fun.
Julie, that teacup has been sitting around for literally years waiting for me to do something with it. Glue guns rock!
Melinda, I know what you mean, I get so behind on reading blogs, which I really enjoy. They inspire me. The Amazon patterns are pretty simple, but there are some really cute ones. I have my eye on a tree of life one at the moment.