The Last of The New Stash, and Stitching

So with the last few dollars of my stash money I decided to order two charts I've been thinking of for some time. I've never ordered from Shinysun's Cross Stitching, though I've been aware of them for quite a long time. I had 3 or 4 charts picked out that I really wanted to do, but never did order them, mainly because I prefer my charts in PDF format and these are hard copy only.

Long story short, they had a half price sale, and with their charts being so reasonable to begin with I decided to give it a shot with my last 10 dollars. I've seen a good many of her charts being stitched and finish, and they look great, so there were no worries there, and I asked a friend that I know had ordered some what she thought and she wholeheartedly recommended them. Since it was a half price sale I resigned myself to waiting 2 to 3 weeks for my charts to arrive, though of course I started watching for them after just 7 days, 'cause hey, who can resist stalking the mailman when they have something fun coming? But seriously, with a big sale like that I thought there would be extra orders and I would have to wait longer. I ordered on 9/10/2015 and they were in my hands on 9/21/2015, so really quite good.

Enough explanation, here is what I ordered: 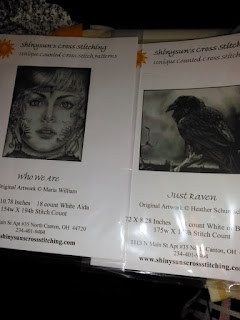 Okay, a poor quality cell phone pic, but I was in a hurry.
Yes, my love of black and white charts got the better of me.

The low down...The charts look great, obviously I haven't stitched anything on them yet, but they look good. The paper is above average but not the highest quality. I'm good with that since I will have to mark them up as I stitch. Everything looks clear and easy to read with one exception. The floss symbol list is small print, really small. And I really don't like that. On top of which, since it isn't a PDF I will have to scan it in to my computer if I want to enlarge it, then figure out how to enlarge it, then print it off. Not a major big deal, but an annoyance. Don't get me wrong, I can see it, but I have to look, if you know what I mean, and when I'm stitching I want it to be instant, a no brainer that I don't even have to think about. The real test, would I order from them again? Yes, certainly, and probably will!

I haven't gotten in the stitching time I'd hoped for lately, I've been ill, my husband changed jobs, and we have a new cat to go along with our 3 dogs, plus the usual work on the job.

I did get to do one thing I'd very much wanted to, which is stitch to the end of the first row on Mini Cheshire Cat. I do love this chart, but when I started it I can't imagine what I was thinking, I started it only about 2 inches from the top of the fabric and it is uncomfortable to stitch that high with my Qsnap on. It needed only the first row to be finished to solve the problem. 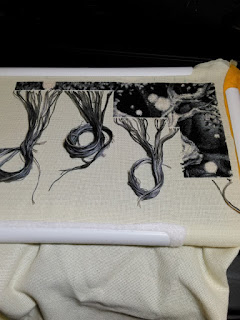 It will now be much more comfortable to stitch. Such a gorgeous chart. Pity I will be putting it away for a bit. I've been setting myself some goals, and this one is probably going to come back out soon for a Halloween SAL. That is the plan at the moment anyway. I would link to the chart at Heaven and Earth Designs but I couldn't find it. The chart may have been retired.

The other wip I have to show you is Tribal Dragon from Charting Creations.

I was able to squeeze out finishing the page I was working on, which is the center page of the chart. 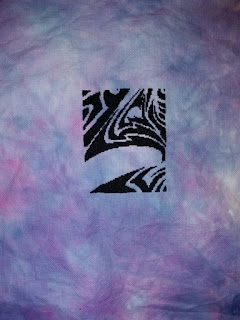 I was actually surprised, since it is a 'waiting' or take-along project and I didn't expect to have a page finish for another month or two at least. I guess I did more waiting around than usual! It looks fabulous so far.

I did say I'd tell you about the pipe insulation. This stuff is really cheap at the hardware store. Less than 2 dollars for a really long piece. It is in the plumping section. 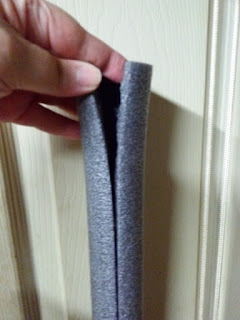 At first I tried cutting it to the size of my floss list for the White Dragon chart. It worked but it rolled a little too much for me. It did slide right on the top of the qsnap, but that got on my nerves! 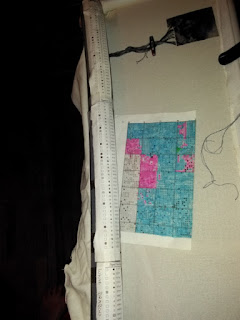 So I asked in my stitching group and found out that one of my friends use them. She is evidently more talented than I am! She draws the symbols onto masking tape and tapes them on. I tried but can't make some of the symbols look right. She also shared a picture showing how she cuts them in half so they lay flat and don't roll. I tried this, and it is briliant. They are light weight, easy to move around and work like a charm. I just kept my taped printed symbol page. I wish the symbols were a little farther apart and will see that they are next time, but it does work. Why didn't I think of that? 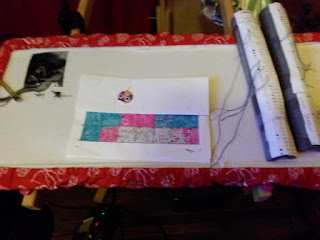 Mine aren't pretty, but they do work. That is 90 color symbols, so yay. Cheap, easier to use than the fancy ones I bought, and readily available. I immediately made up a much smaller one for Mini Cheshire Cat when it came out to be worked on.

Well, this has gotten long, and I've still things to show you next time. Until then, happy stitching everyone!

I love your new charts and cannot wait to see more of the Mini Cheshire Cat progress. (I tried to google a picture of it and failed, so I look forward to watching you "paint" the picture!)

Love it. I've been backreading your blog and just adore it. So great to see someone who doesn't stitch 4 or 6 hours a day, or even every day for that matter. With two kids and an ailing mother I often feel I should just quit, but I do get an hour 2 or three times a week. Sorry for going on and on. I really enjoy your blog.