I had to take a picture yesterday to update my progress this month for my little stitching group. Let me explain. I am lucky enough to be part of a small private stitching group of friends. We decided to do a stitch along each month this year. A no pressure friendly stitch along.
For instance, January was weather and season's. I didn't have anything that exactly matched. I stitched a bit on Basilisk, but hardly enough to notice.
Mostly because I took part in the new start sal and started Castle, by Teresa Wentzler. I got only a tiny bit done on it. Still on limited stitching time with my hands and arms. I'll post a picture of that when I have more to show. now it is just an inch or so of grayish purple wall.

February's Theme was The one that you are closest to finishing. So I worked on Celtic Noel again. I started a little early, at the end of January and was able to get a bit extra in.

Here is the picture I took while moving the Qsnap. 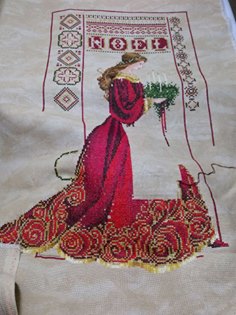 So very nice progress for a change. It looks like more because, of course, it isn't a full coverage piece.  I am really looking forward to finishing the stitching on this and getting on with the beading.
When I began this I had planned about 4 months for it. Then, when I couldn't stitch, she just sat there and waited for me. I do love this piece. It is feeling really good to see progress and I'd be tempted to continue on with her but March is Confetti month and I have several projects that will fit with that theme.

I am taking part in the stitch from stash 2017 on Facebook and so far haven't spent anything. I will be using my 123Stitch gift money soon for some threads I need. Luckily that doesn't count since I've  had it since before the year began.

It is great to see your beautiful post, such post is rarely seen, I am really very impressed with your post and I hope you keep writing more such posts in your life. Clothing
Bussiness Dropshipping
establish good relationship
Gurgaon VIP Girl
Gurugram Party Girl
Gurgaon Dating Girl
VIP Girl Gurgaon

Thank you for sharing, please visit
Visit Us