Today is the first anniversary of my blog. I can hardly believe it has been a year already. There have been so many changes and so much has happened, and yet it has all flown by so quickly.

Just lately I've been putting off doing a blog post, mostly because I am embarrassed. Not because I'm not stitching or doing projects so much as because I've been very scattered about everything I am doing. My mojo comes and goes seemingly without a pattern.

This past week has been a big one! After not leaving the house for about 6 weeks we had our old truck running. For a few days. Now it has to go back to have the clutch worked on again on Thursday and we will be without transportation again. But meanwhile, Teresa and Molly sent me a surprise last week. I actually didn't get it until early Monday morning, the second HAED RAK glitch in a row. Here is the chart she sent me. 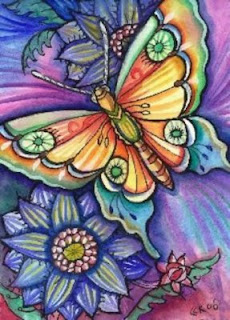 QS Butterfly Two. Isn't it the prettiest thing? I love the colors and now have to decide between it, and QS Blue Butterfly. I swear sometimes Teresa (Or is it Molly?) can read my mind. She actually sent it to me on the day we realized the truck wasn't right and would need more work. I was so down and just knowing I had a surprise coming peaked my interest. I couldn't wait for things to get straightened out so I could see what she had sent me. Thanks so much Teresa.

Also last week I was turned loose in the kits section and told to pick some out. Like, 200 dollars worth. I easily managed to stay way below that number (like way less than half) but here is a pic of what I did get. They were on a great sale. 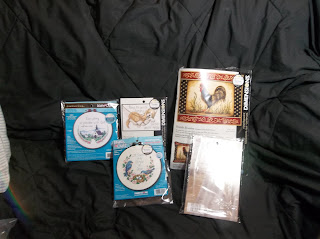 Of course the daylight bulb is glaring on everything, so I'll describe. There are 2 beginner kits that come with pretty much everything including the hoop! I like the saying on both of these and have already opened one of them so expect to see some of it stitched up here soon. The third cross stitch kit is one I've seen a bunch of times and always meant to get Sleep till your hungry, eat till your sleepy. Love that pup in this one! Next is the Rooster Needlepoint kit. Partly painted canvas, but all of the borders are charted. Then, the one you can't see, which isn't a kit but one of those pre-stamped embroidery tablecloths.  I managed to find a pic. 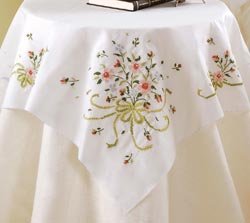 And yes, I've peeked into it and found I have the colors of floss it calls for, so it will probably be a wip on here before long. I've always wanted one of the tables they show in this pic, so maybe by the time I've finished embroidering this I will have gotten one. Did anyone ever do those pillow slips they sell. I did those when I was younger and they were so much fun.

So other than gathering stash Karen, have you done any actual stitching. Well, yes, but not a lot really. There have been distractions. I made the one seam skirt. No pic, I tested it on some old brown corduroy never expecting to be able to actually wear it, but now I have this wonderfully warm maxi skirt that I've worn 3 times since I made it! I worked on my kitchen piece for the HAEDless SAL.
Progress: 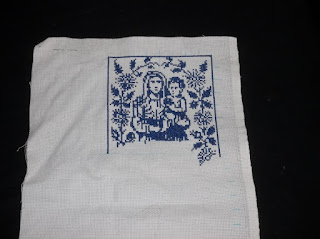 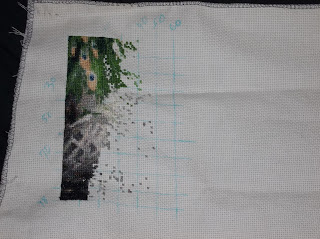 A little Needlepoint that put me out of stitching for 4 or 5 days because once again I just had to try to go back to using a frame and messed my shoulder and neck up, again. You'd think I'd learn! 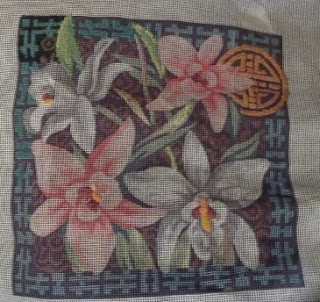 That is about all. I'm sure I've left stuff out but will get to it next time as this has gotten long.

Happy stitching my friends, and happy stashing!
Posted by Mama Dog at 6:11 PM

Looks to me like you've been doing plenty since you've been home! I love the kits and stuff, what a great surprise! And the colors in the butterfly charts are wonderful.

Nice new stash you acquired, the tablebloth is going to be superb.

I was just thinking of cordury the other day - Your skirt must be amazing. Your stash is awesome, the QS Butterfly is so pretty. I think you did get a lot of stitchng done.

Looks like quite a lot to me! I promise you I'd have spent the entire 200 and then been asking if that was with the sales tax or not! lol. I hope you enjoy your new found treasures, and what a great RAK! I can see butterfly's in your future!

Don't be embarrassed, we aren't here to judge, just to read and encourage! My mojo is forever going in the wrong direction...usually the opposite of where I need it to be going!

That's a lovely chart that Teresa and Molly bought for you. I was lucky enough to be gifted something from them last year, they are both very kind and generous souls!

You were very restrained with your lovely kit choices....I'd have found it hard to be so good.

Well done on your progress! Look forward to seeing more :)

Thanks for commenting everyone. Julie, I think the tablecloth will be beautiful. Melinda, this was stash corduroy and I could never afford this quality now, if I could find it. Feels so lovely and soft.
Jessie, I was tempted! Believe me.
Angie, Thank you. Teresa and Molly are so generous and kind, a real bright spot in so many lives. What did she send you last year?

I'm sorry about your truck, and while the butterfly maybe can't make up for repair costs, he is pretty darn lovely.

Congrats on excellent stashing and stitching.

Ruth, thanks so much for you comment. I am keeping so busy with other things I've only had a little time to play with my new stuff.

Your needlepoint is so lovely - I gave up needlepoint so many years ago when it hurt to look that closely at stitching! Your work is beautiful!

Thank you for the compliment. Needlepoint is so relaxing to work on and I enjoy the larger size than cross stitch.