While I can't believe the year is nearly done, it has, as usual, got me thinking about next year. Traditionally for me December is the month I break rotation and work on whatever I like. Since I haven't had a rotation going that is sort of out, but I'm all about the do what I like part.
I've continued on with Mini Crossing Spirits, slowly working my way across the first row of blocks. Still all the same shades of gray so I didn't take an update pic yet.

Yesterday I also made a small start on  my the stocking my husband chose. I know I said in 2015 but it just seemed right so I went with it. I don't have all the floss yet either, but most. unfortunately the pic came out looking gray when it is actually only 2 lines of a pretty blue. Night and the flash I suppose. Instead I'll post a pic of the magazine it came from. 1990! 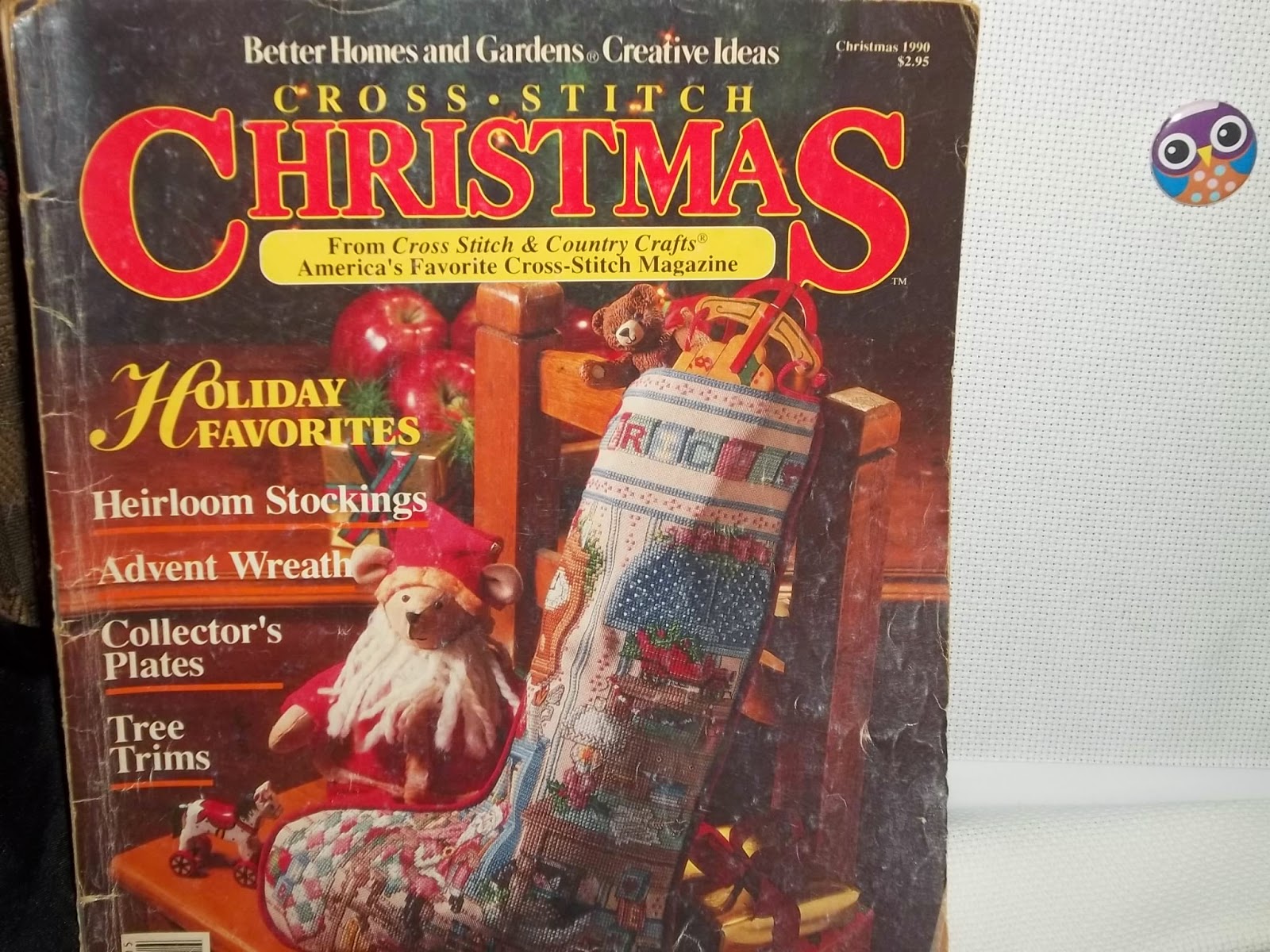 This one has a couple of charts I'd always meant to start, namely the collector's plates, but those will have to wait awhile. The stocking on the cover is similar to the one I'll be working for Jason.

Now the really fun stuff. I have opened my secret Santa gifts. The sender gave me permission  (I promise I didn't ask!) and after that there was no resisting it.
I was just blown away. Thank you secret Santa, you went way over the top with this. I've never had so much nice stitching stuff!! The little owl needleminder in the pic above was one of my pressies. I have the pictures I took for my Facebook group for now, but may put up some others later on.


I confess I've longed for one of the unique needle minder's from HAED but I never thought I would have one. I wish I could take a photo that would show you the depth and richness of that beautiful handmade needle minder.  It is seeing heavy use. If I remember I will show a pic of the ones I was using. The little cheapie red ones that come three in a pack.
BTW, the blanket color in the bottom pics is much more accurate!
The tea had the whole house smelling lovely but I couldn't drink it, I had a sinus allergy attack from it. Bright side is my husband loved it with a capitol L and so he got a bit of a present out of it too!
The hand dyed fabrics are two large pieces of 18 count aida and a piece of 28 ct. Jobelan. These are my first ever hand-dyed fabrics and I love them. They are almost too pretty to stitch on and I will try to get a pic of them up next time.
I've done some test stitching on the 28 ct. and it looks wonderful one over one, with excellent coverage, but I confess I didn't enjoy stitching that count very much. I will be giving it another go later, and also trying it over 2.
I've never felt so spoiled and special as when I opened those packages. I feel so elegant and ladylike at my stand now, stitching away surrounded by all the loveliness.

I hope you are all enjoying a bit of Christmas stitching adventure.
Happy Stitching!
Karen

Sounds like stitching good Christmas for you this year. You deserve it honey, for all you do for others. Merry Christmas!
Jessie

You got some gorgeous gifts and they are well deserved! I hope you have a lovely Christmas and lots of good things in the year to come :)