Whats wrong with this picture? or Where is the frog landing?

So it is the second day of my new rotation. First project being the blue and white sampler, that I once stitched half of, then lost in a move. 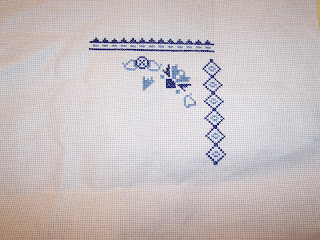 Hardly a start at all.
See that light blue sort of circle on the right? One line off so I decided to frog that bit tonight. I was so tired and achy after work but I finally talked myself into it.

Then I went on with my stitching. You know, the fun part. I'm determined if nothing else.

Here is a pic of the work from yesterday and a few minutes tonight. 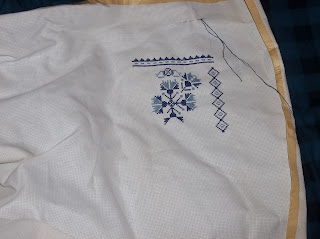 See the pretty flowers coming along? I was filling in the lt. blue and as soon as I finished the one on the left side, what did I see? Look closely. Does that stem look a little short to you? Cause yep, I didn't stitch that part. It is little enough to frog, except I'm tired, except it is an easy enough pattern that I shouldn't have messed up, except I don't feel like it. Whiny is what I feel.

It isn't much to frog and re-stitch compared to when I have had to re-start a BAP, or mini Soul Mates. But for some reason, perhaps because of the aching, this one bothers me more tonight. I'm weird I guess. So instead of frogging I'm curled up here sharing a fail. Not an epic fail, or even a big deal really. I guess it just feels more productive to blog the frog than frogging that tiny flower at the moment.

I think I'm going to look at other peoples stitching for a bit.

Happy stitching everyone!
Posted by Mama Dog at 7:35 PM