A Difficult Week, and stitching

Last week was definitely one I will always remember.
On Tuesday I was nearly mugged or something in a local parking lot. I was able to run and lock myself in my car and security appeared like magic just as I did and the guy ran away. Pretty upsetting I can tell you.

On Friday morning I was called into my office and got my lay-off notice along with a lot of others. I will be ending employment at the end of December. I found out today another local hospital laid-off 200 people Friday. It is happening at all the hospitals from what people are telling me, apparently actions that have been planned for months and put into effect based on the presidential election. At any rate, finding something else in system or in the medical field isn't looking too good in my city right now. I confess I am more than a little worried about finding any other job right now.

On to stitching.
I confess I missed a night or two this week. I was feeling pretty traumatized after the parking lot incident and well, life gets busy sometimes.

I did get a bit done though. I stitched on some ornaments and on those little Bucilla kits like they sell at Walmart and such for 97 cents.

Here is the one I took a pic of. 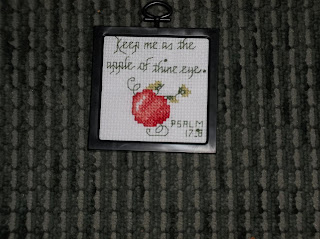 My camera seems to have trouble picking up small objects. I also left some of the greenery off of this one as it looked better without it. I'm glad I decided to pull these out as a little instant gratification was in order. Still have one or two but I don't know when I'll do those. Also, those little plastic frames are fussy. Don't like those. Lots of floss included though.

The only other thing I really worked on this week was Mini Soul Mates. I was able to finish the row and I'm looking forward to the next one. Wings!  lol.
Note to the person who asked me if Mini's have a lot less confetti.  No, they have just as much as any other HAED so far as I can tell. Just compacted down. 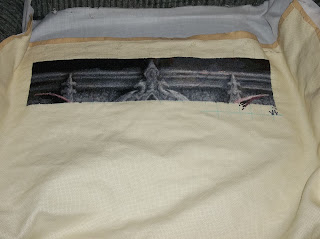 And that is pretty much it for last week. I did have a panicky moment or two wondering if I'd made a mistake joining the 2013 HAED SAL last week but I've settled down since. I 'think' I have fabric that will do and I will borrow floss from other projects and pick up a few skeins before I run out of cash completely, and I will stitch what I can as I can. I'm looking forward to it actually. I love the tigers and I know I'll enjoy stitching that chart.

That's all for now folks.
Happy Stitching to you all through out the coming week.

Big hugs to you and I hope you find a new job soon. Great stitching:)

My goodness what a terrible week for you! Hugs for you my dear! x

I too am doing the same BB SAL - I am really looking forward to it! :)

Forgot to add I mentioned your blog on mine http://charbellastitching.blogspot.com.au/ :)

Karen, sorry about you week. Hope it gets better soon. I've done some fabby raks on fb and was planning another soon. If you want to email me, with fav ct, I can send you a piece before the sal starts. I've got lots extra and enjoy passing it on, when I can't rak other ways. :o)Email is christascritters@gmail.com

I hope 2013 is a bright new start for you and that it brings new beginnings that will enhance your life.

A very scarey incident, so pleased you were ok.

Wow, thank you all so much, I feel better just reading all your caring responses. Sharine, thank you for mentioning my little blog. I am going over there in a moment to see!
Sophia, I have found a piece of 18 ct. aida for the SAL. I am overwhelmed by your kindness in offering to help me out. Thank you doesn't seem like enough when the offer gave me such a lift and made me feel so much better about things. Stitching friends are so kind and generous. Another offered to go through her threads and send some of what I need. How sweet and thoughtful is that? Only another stitcher would know how much it means to me.

I am so sorry to hear about your horrible week. With Obama elected for another 4 years I do not see any improvement on the horizon... so sad... Thank goodness for our stitching! {{{{{hugs}}}}

EvalinaMaria, you are completely right. It is the new healthcare going into effect as well as the new Medicare guidelines that began ticking over in the past year and continue to as part of it. Someone got very offended when I said that was the cause, but so we were told and I see no reason to doubt it. I am told 80 people from our hospital were cut, and 200 from a sister hospital, and I don't know at the others. Now add that up to hospitals across the country and tell me what sort of care your going to receive under this new program. Also, if we aren't working we can't very well pay for health insurance that is skyrocketing (Note Walmart for instance). A very sad situation all around.