So my budget got blasted last weekend and I was very much afraid I wouldn't be able to support HAED as I'd promised since I have another unexpected expense coming up on Monday. With care I was able to go ahead a buy a HAED in support of HAED appreciation week, even though it was a trifle early. I was afraid if I waited there would be nothing left to appreciate with!

I had gone back and cut my greedy chart list down from 28 to 12 yesterday, and now it is down to 11 since I bought a chart. I try to keep it under 10 but sometimes I go crazy and add a bunch of stuff to it. The point being, it was quite difficult to choose a a chart. I haven't had the funds to buy one in a long time and it was just difficult.

I will show you my choices but first the chart I did buy. 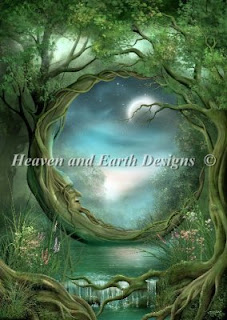 Day Night by Shannon: This one went on my wishlist the minute it came out.in April 2011 and has stayed there since. I would have bought Pals if a wonderful friend hadn't RAK'd it to me a bit back as it is another pattern that became a must stitch. Pals is pictured in another post. I had decided on The Ghost by Sinz: 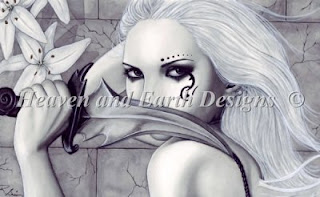 But when it came time to buy I was in need of color and I knew I longed to stitch Day Night more. But it was still difficult because Dixie: 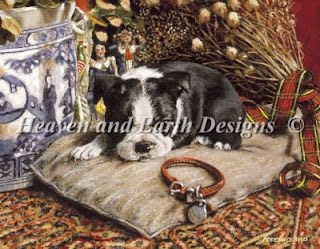 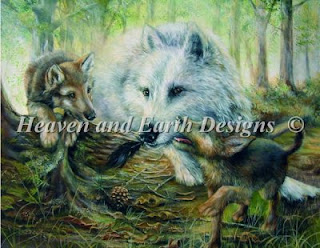 and the ever humongous Knock at the Door: 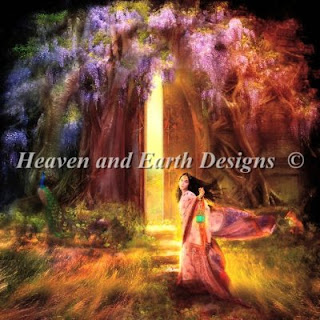 were all enormously appealing.

Knock I could justify because it is so huge I'd never need another chart again. Daisy is a long time favorite and Dixie is just too adorable.

I think the thing that tipped me to Day Night was the color. I love the greens and think it would be both pleasure and nightmare to stitch them. Soothing and exciting to watch the subtleties emerge.
Knowing it could be months, if not a year, before I can buy another chart was a bit of a motivator to. I'm not starting anything unplanned until something is finished. Can't afford fabric or floss anyway, so in the short run it doesn't matter what I picked. But I knew my next start after I finish something will probably be Pals, after my birthday start(only two or so  weeks away, Tree of Life)  and Christmas starts (Still unkitted) that were already planned.

So a not too exciting look into the mind of a stitcher on a short budget for you this morning. How do you guys choose your projects? If you could only choose one new chart in the next year what would you pick and do you know why you would pick that one?

Happy Stitching for the rest of the week everyone.

Love the new chart, a beauty. Glad you were able to support your fav. pattern store.

You think you greedy for having 28 charts on your wish list?! I don't dare admit how many are on mine... ;)

Great choice and look forward to seeing you stitch it.

Great new pattern. I will be adding the Sinz chart to my wish list.