I've thought very seriously about my stitching just lately. I organized how my new rotation would go and just finalized it on Wed. For some reason I have been blessed with all of the must have charts I have wanted in this past year. Except for one or two, certainly every HAED I felt were things I must try to stitch. My bucket list, so to speak. There were two charts on there that were discontinued, one from HAED. Yesterday that one was re-released, and even though I don't need another chart, don't have time to stitch another chart, or the money to buy another or kit another up, I bought it.  With DH's blessing. He's such a sweetie.

That chart was The Eternal Promise, and I am no different than so many others in having wished that chart hadn't been discontinued. Here is the pic from the HAED website. 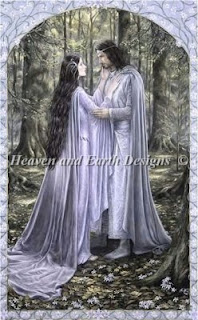 It has been changed in that it is larger, with more detail on the dress.

Now why would I buy it, given all that I wrote above? Not just because I wanted it, but because my fundamental thoughts about stitching have changed over the past 2 or 3 years. I no longer stitch just one chart, I no longer aim for the goal of a finish. No, I've become more of a process stitcher. It is the stitching itself I must have and do, the 'final goal' being simply to enjoy my stitching time. No rush, no fuss or worry about when I'll 'accomplish' something with it.

What about you? Do you have to finish something? Does it disturb you to work on more than one or two projects at a time? Does the idea of just stitching on the pieces you love and are passionate about free you or make you shudder at the idea of having so many projects going at once? Is there one chart that would make you drop everything and do an immediate start, and if so What and Why? Some charts just call to us.


I thought I would start the rotation back up in Oct. After I do my birthday start. I love having all of these wonderful things to work on but I've discovered I need some sort of structure to feel content with it. Since I know I'll be starting 2 more new large and involved projects this year I have decided to forgo my Christmas start. I know I got carried away with new starts this year because of all the pretties I've received as gifts. So Tree of Life on the 28th, and The Eternal Promise as soon as I can organize and afford to begin.

I had thought that Pals or Day Night would be my next big start but Promise has managed to supersede them. At least for now. I will give details on the rotation next post if you guys are interested, as I have changed it, but only a little.

Ah well, must go to work. Happy Weekend stitching everyone!
Posted by Mama Dog at 8:52 AM